The shift times tool is a batch processor for timestamps; it adjusts the start/end timestamps of many subtitle lines at once in various ways. It is located under Timing -> Shift Times. 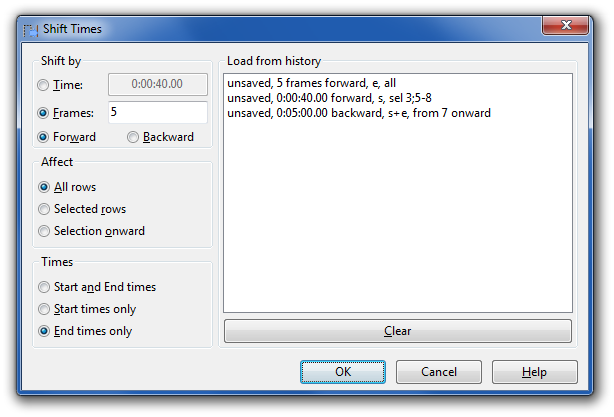 The left part of the window contain the options.

These controls decide in which direction and by how much each timestamp will be modified.

Time
How much you want to adjust each timestamp, in hours:minutes:seconds.centiseconds.
Frames
If you have video loaded, you can specify the adjustment time as a number of frames instead. Note that shifting by zero frames will snap the timestamps to the frame times without doing any shifting.
Forward or Backward
Controls in which direction the timestamps are adjusted.

These controls decide what lines will be processed.

These controls decide what timestamps will be processed.

Note that if a line is shifted so that its start or end time stamp would be negative, that timestamp is zeroed instead. This can be used to clear all timings from an entire script, by shifting backwards by longer than the latest timestamp in the script.

This is a history of all time shiftings you have done since last time you cleared the shift history (with the clear button). The format is a number of fields separated by commas. The fields are:

To load the settings from a history entry simply double-click it.